Amazonia, vaccinations for the Ribeirinhos have begun

Burundi is engaging local authorities and communities to strengthen the project 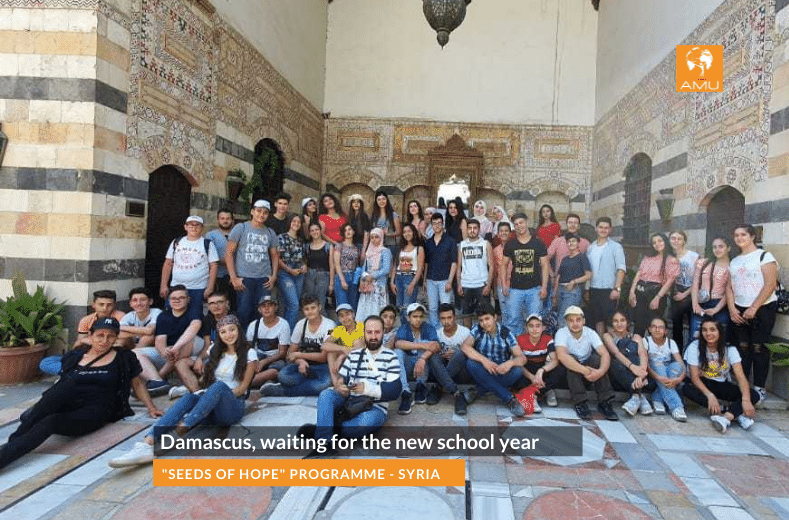 At the after-school club in Damascus called “Our Youth is Our Future”, the young people spent the day getting to know one another better and learning more their own country.

In June, the young people starting fourth-grade next year and preparing for their high-school-leaving exams, two key stages in the school calendar for young Syrians, enrolled in the after-school club in Damascus (part of the “Seeds of Hope” programme in Syria) and spent a day outside classtime at the end of July getting to know each other and their country better. It was an opportunity for fun and sharing together whilst waiting for the school year and remedial lessons* to start in September.

This year the project animators decided to set off early in the morning to visit a number of archaeological sites, starting with Khan Asaad Pasha where, after a nice breakfast, an official told the young people about the origins and development of the place.
The trip continued to nearby Azem Palace, an archaeological site of great beauty, divided into several pavilions and rooms illustrating and explaining many of the customs and traditions in Syrian folklore. The tour was very detailed and ended with lunch in one of the old restaurants in Damascus.
The high school students then spent the afternoon in a café where the programme continued with organised and improvised songs and games.

The young people were all enthusiastic and wanted to take lots of souvenir photos to share these outdoor experiences with their peers.
The day gave them an opportunity to experience first-hand the atmosphere in the after-school club, where they can not only catch up with their schoolwork but also meet their friends, grow together and experience enjoyable learning moments that will stay with them for a long time!

*In Syria, after years of war and difficulties resulting from international sanctions, public services have all but disappeared, especially school services. Children find it difficult to study in overcrowded classrooms with few teachers and don’t manage to study well at home either. In order to pass exams, they all need catch-up classes and extra tuition which is very expensive. The Damascus after-school club offers these services and leisure activities at low prices to support the low-income families who want to give their children a good education. The intensive courses begin in June then in September the children choose the subjects they find most difficult, those for which they need to be accompanied by the teachers and staff in the centre.