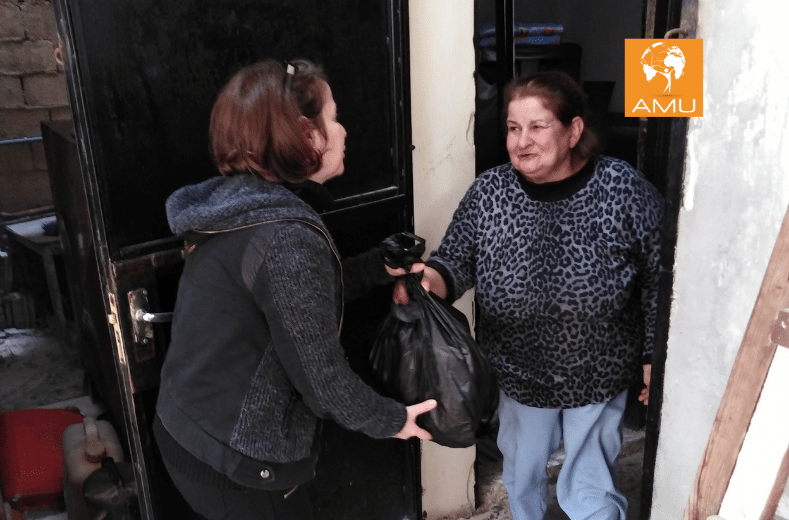 The reciprocity that characterises AMU’s work helps project leaders to identify and draw out potential skills and talents so as to contribute to the development of their own community.

Samer is the director of the medical centre in Homs for the “Seeds of Hope” programme in Syria. Every day, as well as assisting the sick people who are part of the programme, ensuring they have the support they need to be able to continue with the treatment, medical examinations and analyses they need, Samer looks for other ways of helping those not supported by the programme, involving family and friends in the search for new sources of funding for families in need.

Faida and Eliana, who decided to help Samer look for new grants, said it was not easy in the beginning, and they were really discouraged.  It was only Samer’s patience and faith that convinced them not to stop just because some of their attempts had been unsuccessful or because they had not collected much aid in one day.

“Let’s start and God will help us,’ Samer told them, and so it was.  They started by putting in their contribution and soon received a large donation followed by others until the proceeds were enough to support 20 families with chicken, coffee and other basic necessities as well as a small amount of money.

The sincere gratitude of those who received that small amount of support, the stories of those who received help just when they had run out of everything, even the hope and awareness that, as Samer says: “joy has entered those homes and hearts”, enabled Faida and Eliana to overcome their perplexities and initial difficulties.

With reciprocity, it is enough just to start! All of us, with a little gesture and our willingness and enthusiasm to involve others, can start a circle of reciprocal solidarity to bring joy to the homes and hearts of those experiencing difficult times like the Syrian families who are exhausted by the consequences of war.