Syria – Ten years of Calvary, but we still sow “Seeds of Hope”

Thank you for repairing our house (Philippines) 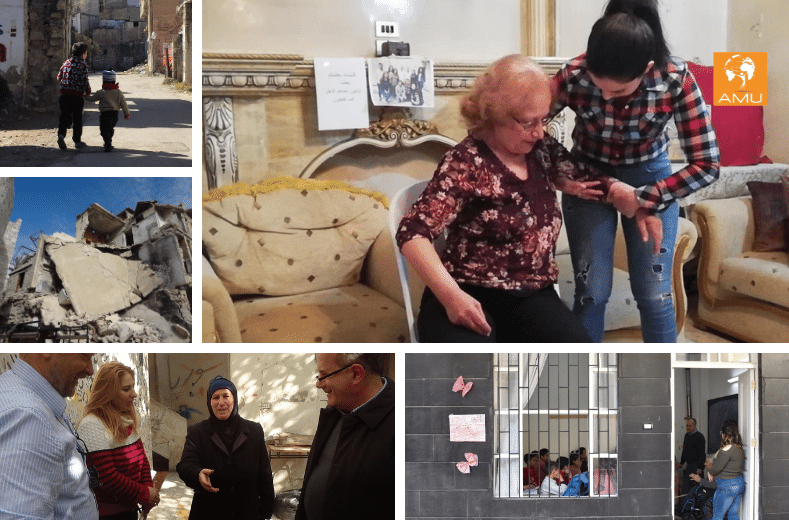 Ten years ago, the Syrian crisis began – a war that has devastated the country with serious psychological, economic and social repercussions. The country’s socio-economic situation continues to deteriorate, and 2020 has seen a sharp decline in people’s living conditions because wages have not increased and unemployment has risen sharply.

Last year, still faced with much partial reconstruction of the situation, we offered a broader reflection of in our article entitled “Questions about Syria today, for those interested in understanding the situation” which unfortunately is still relevant today: “After nine years of work supporting the people of Syria and two trips through the main cities of Syria, after speaking in person to hundreds of Syrians, after seeing with my own eyes, reading about and studying the situation, I would be asking myself some questions, and I would be expecting some help from the media in asking me questions. Is anyone wondering when the war started? Who started the war? Did the Syrian regime attack or was Syria attacked? Who attacked Syria?”

Today more than ever, each of us needs to be aware of what Syria and its people need, but more importantly we need to be aware that it is the civilians who continue to suffer most heavily from international sanctions, without any resolution to the conflict. That is why, today more than ever, we are relaunching our call for an immediate end to the embargo on Syria – SIGN HERE. And even more strongly we unite ourselves with all calls to STOP the construction and sale of weapons.
The stories we hear from the country tell of a people who are exhausted, struggling with huge challenges every day. Neighbourhoods that were not bombed are now overcrowded and public services have collapsed. Unemployment, the devaluation of the Syrian lira and the consequences of international sanctions are affecting families who are having to resort to external aid to meet their basic needs.

And now Syrians are having to cope with a growing electricity crisis: the lucky ones have electricity for a few hours a day, albeit at non-defined times. Those who can afford to buy ‘amperes’ (the unit of measurement used for electricity) have seen prices rise from 1,000 SYP (Syrian lira) to 5,000 SYP per ampere. This situation obviously causes great inconvenience in all areas of daily life: for those studying, for hospitals or for homes who are unable to use household appliances, especially electric stoves.

Added to this is the fuel and petrol crisis which, like electricity, is in short supply due to the embargo. Sometimes petrol is delivered on alternate days according to whether your number plate is odd or even. For urgent needs, people buy petrol on the black market at a cost has risen from 250 SYP/L to 2,500 SYP/L. As regards domestic heating fuel, each Syrian family is entitled to 100L at the price supported by the government which is 185 SYP, but many families have not been able to access their share this year because of the crisis and have had to resort to the black market.

The COVID-19 pandemic is making social life complicated and increasing fear and loneliness, and the country does not have the basic conditions to deal with it, due to doctors leaving the country and the lack of medicine available. If more and more people contract the virus, it will be a disaster.
Plagued by these daily challenges, the Syrian people are exhausted, living in fear and are no longer able to look to their future.

This is the greatest challenge for us who, with programmes like Seeds of Hope, continue to assist families by trying to instill confidence that reconstruction will begin again soon. Every day, Syrians believe in this hope and even though they are receiving, they continue to give, for the country and for their community.

The main commitment of those working on the ground is not only to respond to material needs, but also to offer psychological support to those who are victims of a war that is still going on today and is destroying much more than homes, schools and hospitals.