A year of planetarian communion! 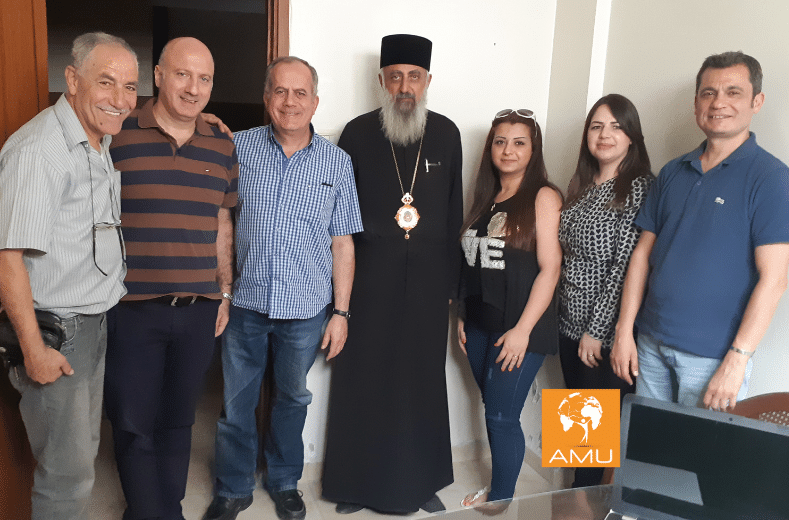 Hama is the fourth largest city in Syria in terms of population and whilst it wasn’t destroyed by the war, it has, nevertheless, suffered the consequences of war.  Because it is still intact many displaced persons have sought refuge in this area.  This in turn has put increased pressure on public services and aggravated the unemployment situation.  Moreover, because Hama has not suffered major damage to its houses and structures, it has received little help from aid organisations.

Last October, thanks to the positive experience we have had in Homs, we decided to start a medical centre as part of the “Seeds of Hope” program in Hama, dedicated to people suffering from cancer and on dialysis.

It is becoming increasingly difficult and expensive to be treated for these diseases because of international sanctions and general inflation throughout the country. The people of Hama who have been affected by a severe economic crisis which is making it almost impossible for them to afford the basic necessities very often have no choice but to interrupt their treatment or replace necessary drugs with other, less effective ones.

So news that the centre was being opened was warmly received by the entire community which has provided concrete help and substantial psychological support to the practitioners.

When the centre was being set up, for example, someone who was supplying certain equipment (a battery charger for machinery and a lift) decided to donate them free of charge when he realised what kind of project we were going to launch. It was the same story for the pharmacy which offered a 15% discount on the first orders of medicines.  A number of doctors also offered their services either free of charge or with substantial discounts.

There are very few medical centres in Hama, especially those that offer cancer treatment and dialysis so news of the centre quickly spread throughout the city, and many more patients than expected came asking for help right from day one.

Fawaz, the logistics manager for the medical project in Hama, said: “When we started working here we had no idea there were so many cancer patients”.

Besides the financial assistance offered for treatment, what strikes and helps the patients most in Hama and the other “Seeds of Hope” medical centres is the attention given to their emotional wellbeing. Here too, we have heard stories of people who, because of their illness and the difficulties they experienced in getting treatment, were sinking into a state of distrust and loneliness. This is why the programme makes sure that as well as providing care and therapy, every service-user also receives regular visits and phone calls to check on their moods and feelings to try to alleviate their psychological suffering.

Support the “Seeds of Hope” program