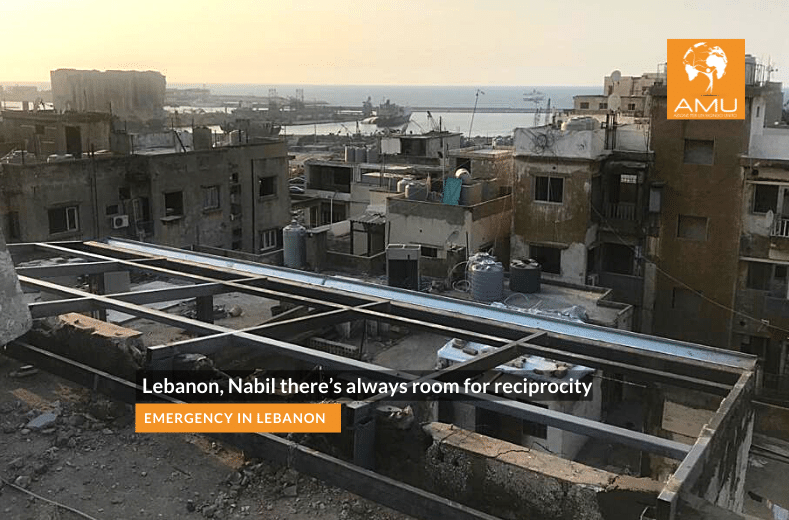 Reconstruction work is going ahead after the explosion in Beirut and is bringing with it small and large gestures of reciprocity, even from those who have lost practically everything.

Despite delays due to restrictions imposed by the pandemic, the work of repairing or supplying what is needed to go back to work has continued, and the second phase of the project has begun which will respond to new needs determined by the community.

The stories we hear from the protagonists talk of problems and needs that continue to emerge but also of the strength and dignity of a community that is eager to get back on its feet and which, in spite of the difficulties, never forgets to give others whatever it can.

Nabil, 51 years old, had only been in his house in the Mar Mekhayel district opposite the port of Beirut for four months.  He lived there with his mother, uncle and brother.

His home was destroyed in the explosion and looted in the following days. With the help of a number of NGOs that carried out the repair work, Nabil and his family were able to return home.

However, the explosion also destroyed the computer that Nabil used for work. Because of the economic situation in the country, he had lost his job in a company but had managed to keep an extra job teaching mathematics (at a distance, due to COVID-19 restrictions). Funds from Lebanon Emergency enabled him to buy a laptop with all the features he needed.

All Nabil wanted was the chance to go back to work and earn a decent wage.

As we have always said, reciprocity is an experience in which everyone can be a protagonist, even with small gestures, even in the midst of difficulty where it seems you don’t have anything to give to others. So, as soon as he received his computer, Nabil made himself available by offering maths lessons to children from families in greatest need. This has given him new energy and is also helping him to overcome the psychological trauma of the explosion.

Following the first interventions which enabled people to move back home before the winter, further needs are still emerging.  Many families have no household appliances, their furniture needs repairing and some people need to recover their work tools to be able to return to work. Humanité Nouvelle continues to keep a record of the needs that are arising and are planning interventions one by one.

Lebanese families are still badly affected by this succession of events – first the economic crisis, then the explosion in the port and now the pandemic.  Not only do they need material support, they also need to overcome the psychological trauma caused by all these difficulties.