Ecuador, how a support network is born

Afghan refugees, how welcome is born

Burundi, Acqueline and communion with the group 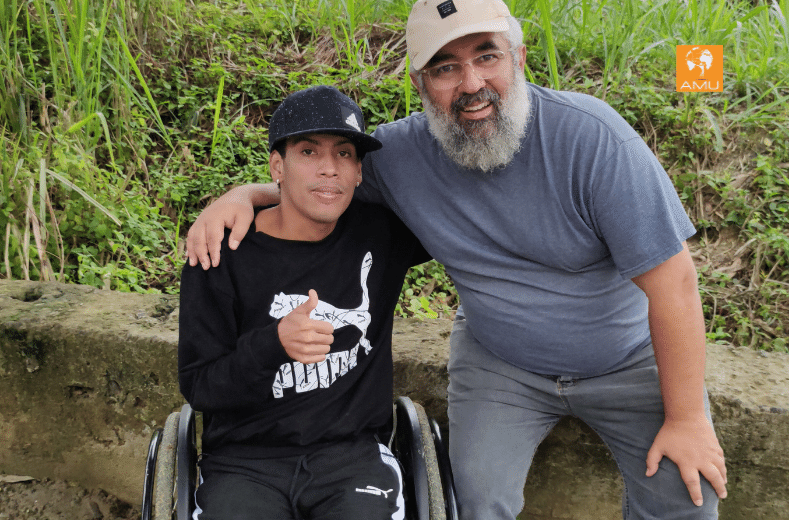 From a chance meeting and a desire to get involved, a young man finds hope and the means not to give up at his wheelchair.

Among the “Sunrise +” project’s activities in Ecuador are those involving young people who follow the 6×1 method “Six steps to a goal”. During one of the visits to the community of Sálima we were hosted by the aunt of one of the participants for a moment of sharing and celebration.
We were welcomed into a humble house with a simple but really tasty prawn-based lunch and a warm welcome that immediately engaged the whole group in a positive, family atmosphere.
At a certain point during the meal a young man in a wheelchair approached our tables.

We discovered he was the householder’s son who was celebrating his birthday that very day. Before inviting us to celebrate with him, we listened to his story: he was a hairdresser but a work accident has left him confined to a wheelchair. From that day on, all seemed lost. He felt hopeless.

We couldn’t give up on this young man’s words. We spent the afternoon in deep dialogue trying to give him new confidence and encourage him to start his life again as it was before the accident. It seemed impossible for him so we made a deal: if we could find him the tools he needed to restart his hairdressing business and if his physical condition permitted, he would start again.

We immediately started looking for someone who could afford the cost of materials, about 200 dollars. A friend of ours responded and donated the money. (He later told us that soon after giving the money he managed to find a tenant for a house he had previously been unable to rent which meant he was able to recuperate the income he needed for his family).
The network grew even more when we shared his story. A physiotherapist offered to help and taught the young man a number of exercises he could do at home.
The young hairdresser is now back at work and has regained hope of building a future for himself.

In our projects, it often happens that we accompany these processes of spontaneous solidarity which start with a small approach and end up creating a network of support and love.

To support the SUNRISE+ project in Ecuador