Burundi is engaging local authorities and communities to strengthen the project 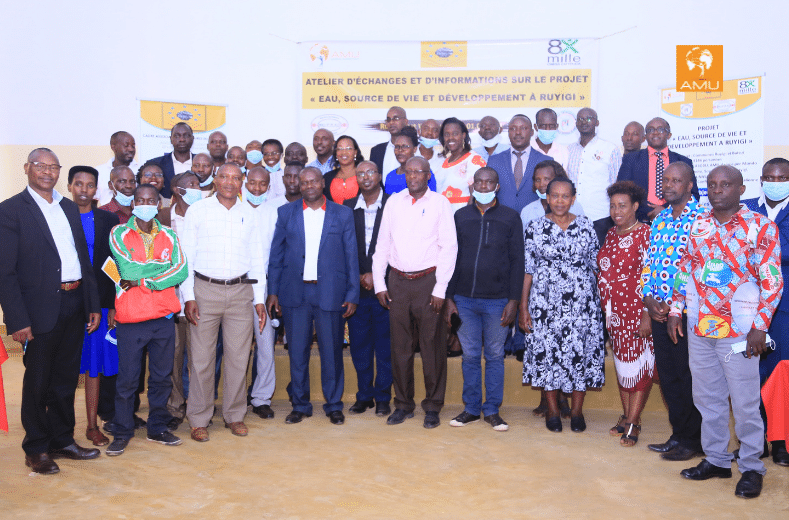 The collaboration and involvement of local institutions and local people remains one of the key aspects In the sustainability process of the “Water, source of life and development in Ruyigi” project.

For a project to be sustainable, that is to be able to sustain itself and produce results, even beyond the period of intervention, it is important to listen to, share with and make local authorities and communities an active part of the whole process. This is something to which AMU has always devoted a great deal of time, together with the training of local counterparts.

For this reason, CASOBU, a local partner in the “Water, source of life and development in Ruyigi” project in Burundi, organised a working group where the various stakeholders would play a leading role. The group consisted of managers from the Ministry of Hydraulics, Energy and Mines (MINHEM), those from the Burundi Rural Agency for Water and Sanitation (AHAMR), administrative officials at provincial level and those from the municipalities of Butezi and Ruyigi, as well as grassroots administrators, area and hill chiefs, and staff from CASOBU, SOPRAD and MUNASA involved in implementing the interventions.

“We invited the stakeholders to inform them and discuss different aspects regarding the implementation of interventions together to involve them and ensure future sustainability,” Jérôme Nibaruta, project coordinator, told us.

The workshop enabled all characteristics of the project to be presented, the project’s activities (those already being implemented and those planned for the future) and triggered an important discussion with plenty of suggestions for the future.

The day spent together was very much appreciated by the different players, especially with regard to the explanations and transparency of CASOBU. Everyone is aware that knowing more about the interventions and the project’s potential benefits will also allow them to involve their own communities.

In his speech, Emmerencienne TABU, Governor of the Ruyigi Province, invited the administrators present to educate the beneficiaries about the project so that they could take responsibility for it and actively participate in its implementation.

“We warmly thank CASOBU for organising this workshop. We also appreciate the partnership protocol for future sustainability offered by CASOBU and the transparency in project implementation. I am confident that with the cooperation of all stakeholders, this project will be successful” said Jeanne NIZIGIYIMANA, Director General of Drinking Water and Basic Sanitation.

Initiatives such as these also serve to reactivate the reciprocity between all players: AMU considers institutions and members of the various communities to be active participants who have the opportunity to participate in the success of the project by each offering their own contribution.

“This workshop has given me the opportunity to really get to know the project in depth. Once again I feel called to mobilise the community to actively participate in the project” Jean NZEYIMANA, chief of Nyaunazi Hill, one of the hills which will be served by the drinking water.

“Water, source of life and development in Ruyigi” project in Burundi