Afghan refugees, how welcome is born

Ecuador, how a support network is born 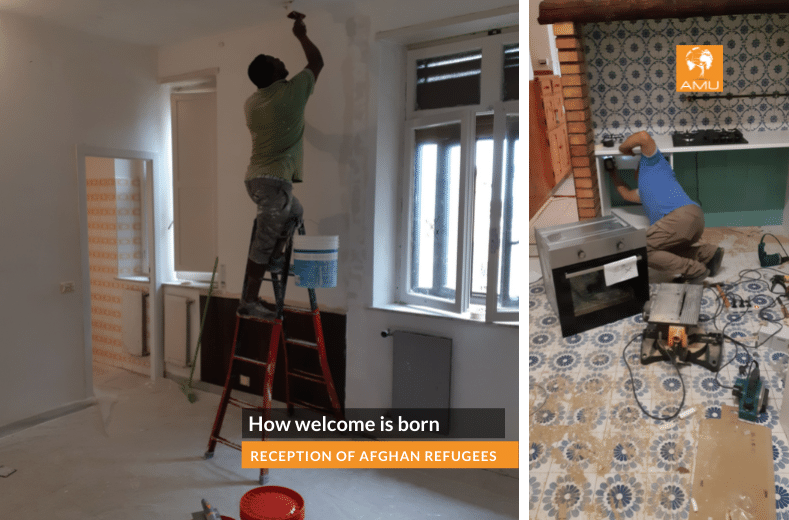 AMU is working alongside the cooperative known as “Una città non basta” (One city is not enough) and supporting the initial activities to welcome refugees by distributing donations covering the cost of supporting and assisting the refugees.

The phone call was totally unexpected.  “Can you take in a group of Afghan people?” the caller asked.  “Yes” was the response from the “Una città non basta” cooperative that has been involved in projects welcoming and integrating refugees for years. “There was only one possible response”, said Issam from Syria who works in the cooperative, “and that was to welcome them. Everything else would somehow get sorted out.”

The co-operative has the use of premises in an old Dominican monastery that it normally uses for social and reception projects.

“When are they coming?” “Tomorrow!”  In fact, there were a few extra days to get things organised, hours which triggered a competition of solidarity: They needed beds? Thanks to the support and collaboration with the Focolare Movement, furniture, beds and everything else needed to furnish and decorate the building arrived. They needed to build a small kitchen? A carpenter took an old table and transformed it into a cooking surface.

“All this ignited everyone’s enthusiasm and we did not feel alone,” say the Cooperative’s workers.

So four rooms in the monastery were adapted to accommodate the new guests in a comfortable and dignified environment.

The ten Afghans, men and women of very different ages, all part of the same family, initially spent the necessary quarantine period stipulated by the anti-Covid regulations in a structure offered by the Focolare Movement, then arrived in Marino.

They had arrived with nothing: they had boarded a plane in Afghanistan in a hurry, with only enough time to flee an extremely dangerous situation and get to safety through a humanitarian corridor. Disorientated, frightened and uncertain, they walked into the rooms of “Una città non basta”, and from there they are setting off on a new journey.

Maria Rosaria, the president of the cooperative, told us: “They don’t know what the future holds but they are building a relationship of trust with us day by day.

We are getting to know each other even through small things, like food. For example, when we had to buy a chicken it was not easy to understand whether the way the meat had been slaughtered was in line with the guests’ religion.

As for the language, one of the workers from the cooperative who happens to be from the same ethnic group as the guests has been invaluable, and almost all of the refugees immediately started following an Italian course run by a volunteer from “Una città non basta”. Now, you start to hear “hellos” and “how are you’s” when you pass them in the corridors of the old monastery. Nothing is simple at the moment. The first emergencies to be faced are documents, medical examinations, vaccinations, schooling for the youngest, and little by little, autonomy in moving around. Then, inclusion. “When they arrived, I told them they are free people now”, said the president of the Cooperative.  “Once we had been to the police station to define the procedures to apply for asylum, they began to calm down. It was as if the tension had been released and they began to open up a bit more with us”.

The next few weeks will be decisive, and thanks to the experience of the Cooperative’s operators, guests will be able to get all the assistance they need and start their journey of inclusion and autonomy.

Here are the characteristics of the intervention