A Vaccine for All - Brazil, the results of the social action supporting the riberinhos - AMU

A Vaccine for All – Brazil, the results of the social action supporting the riberinhos 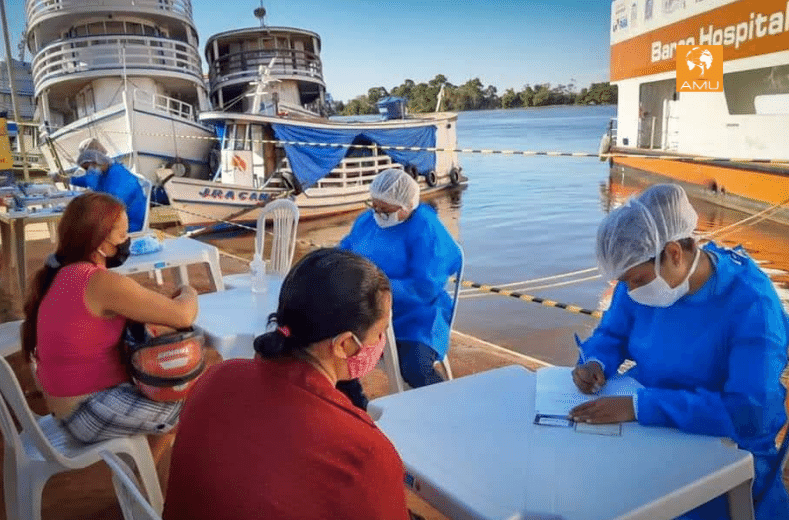 The first project (action-symbol) linked to the “A Vaccine for All” campaign entitled ‘Prevention, vaccine and treatment for the riberinhos of the Amazon’ supporting Covid-19 care and prevention activities on the ‘Papa Francisco’ boat hospital in Brazil has now finished.

Brazil was one of the countries worst affected by Covid19 and the Parà region, where the project’s activities are concentrated, was already in an extremely vulnerable situation before the pandemic.  The action, which began at the same time as the “A Vaccine for All” campaign promoted by an international network of over 40 organisations from different countries appealing to governments to take more decisive action to make vaccines freely available to everyone around the world, is aimed at people known as the riberinhos who live along the banks of the river that crosses the Amazon.

The campaign promoted a political action fostering relations with local authorities and communities to facilitate the social action already initiated by the hospital boat.

With funds raised for the campaign on an international level, AMU – Action for a United World, has managed to support the project ‘Prevention, vaccine and treatment for the riberinhos of the Amazon’ in collaboration with the hospital boat, which distributed food and basic necessities to families in need, equipment for Covid-19 prevention and medicines and assistance from health workers to support the rehabilitation of those who had the disease.

In the initial phase, the interventions concentrated on supporting families affected by the heavy floods that hit the area. In a matter of weeks, people lost their homes, which were flooded by the waters, as well as their boats and fishing nets, the very tools they needed for their livelihoods.

Each mission brought basic necessities to the communities, such as food, water, hygiene products, baby products and medicines.

Subsequently, the government, through the SUS (Single Health System), with the support of the municipality and the churches that made their premises available, began to vaccinate these communities against Covid19 and the “Papa Francisco” boat resumed its activities, including visits, medical analyses, therapies, such as dental care, and operations, from surgery to ophthalmology, which had been suspended during the emergency.

€ 23,448.00 were used for the “Prevention, vaccine and treatment for riberhinos” project which enabled the hospital boat to purchase the following materials:

The following products were not purchased because they were received as donations:

The remaining funds received are being used to support the second symbolic action aimed at people in rural India, and other campaign costs.